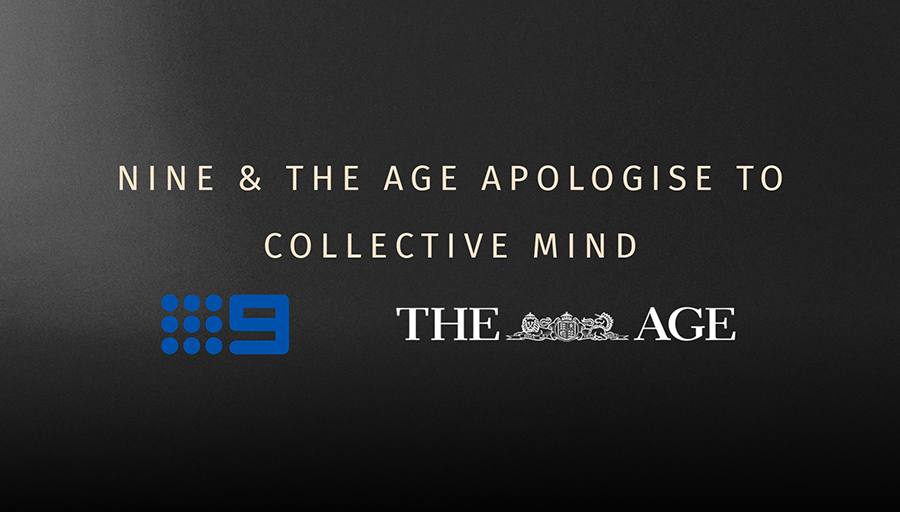 The Nine Network, The Age newspaper and journalists Caroline Wilson and Sam McClure have apologised, issued retractions, and agreed to pay all legal costs to high-performance mindset training specialists, Collective Mind – and its directors, Amon Woulfe and Derek Leddie - after a series of articles and interviews were broadcast and published by the media outlets about the 2018 Adelaide Crows pre-season training camp.

After lengthy legal discussions, the two media entities and high-profile journalists now acknowledge “that the camp was run in good faith and with the players' interests front of mind.”

They have all apologised and expressed regret, if the articles and publications “caused hurt and offence to Mr Woulfe, Mr Leddie and Collective Mind.”

Nine will now retract 13 publications, including two video interviews published between 2018 and 2021, including Sam McClure and Caroline Wilson’s feature stories and TV interviews in July 2020.

After four years of sustained rumours and unfounded speculation about what took place at the 2018 camp, Collective Mind was formally cleared of any wrongdoing after an investigation which took more than a year to complete by workplace safety investigator, Safework SA.

In a statement in September 2021, Safework SA said “There is no evidence of any breach of the Work Health and Safety Act 2012 relating to the camp,” and there were “no findings” or action necessary and the “investigation is now closed”. This is the highest level of clearance the top South Australian regulator on workplace safety can give.

The Adelaide Football Club also declared in a statement that neither the Club “nor any other person or organisation” breached any Work Health and Safety laws during, or in relation to, the camp.  The camp was also investigated and cleared by an AFL Integrity Unit investigation in 2018. For Collective Mind owners Amon Woulfe and Derek Leddie, the apologies from the media giants and journalists come as a welcome, yet overdue, acknowledgement of the truth of the matter.

“This outcome is also a vindication for all those involved, both at the Club and our partner organisations, who can now finally move on and put this unsavoury chapter behind them. Large media organisations and journalists don’t apologise easily, so this is clearly a significant victory for our personal reputations, our brand and our business.” said Mr Woulfe and Mr Leddie.

The statements to be published on page 3 of the Sunday Age on February 6 and on Nine’s the Wide World of Sports website and The Age website on Monday, February 7 for a week, read:
“In July 2020, Nine published and broadcast a number of pieces reporting on the Adelaide Crows camp in 2018.”

“The publications made a number of statements about Amon Woulfe, Derek Leddie and Collective Mind.  Nine acknowledges that Workplace SA made no findings of wrongdoing against Collective Mind. Nine acknowledges that the camp was run in good faith and with the players' interests front of mind.  If the publications were taken to suggest otherwise, Nine withdraws that suggestion.”

“Nine apologises and expresses regret if the publications caused hurt and offence to Mr Woulfe, Mr Leddie and Collective Mind. Nine has withdrawn these publications.”

"On 4 July 2020, an article was published in The Sunday Age and on The Age website reporting on the Adelaide Crows camp in 2018.  The article made a number of statements about Amon Woulfe, Derek Leddie and Collective Mind.  The Age acknowledges that Workplace SA made no findings of wrongdoing against Collective Mind. The Age acknowledges that the camp was run in good faith and with the players' interests front of mind.  If the article was read to suggest otherwise, The Age withdraws that suggestion.

The Age apologises and expresses regret if the article caused hurt and offence to Mr Woulfe, Mr Leddie and Collective Mind. The Age has withdrawn these publications"
Amon Woulfe and Derek Leddie said they were also extremely disappointed with several high-profile individuals who had used their positions to inflame the story over the past four years.

“Former Australian Institute of Sport sports psychologist Jeff Bond has also used his profile to repeatedly question our competence and credentials, the safety of our methods, and our right to do this work, without ever speaking to us or seeking to understand what our programs actually are. The SafeWork SA findings confirm that we were compliant in all three of these areas.”

“These articles quoting Mr Bond are now being retracted by Nine as the truth of this story has finally come out.” said Mr Woulfe and Mr Leddie.

In 2018 the Australian Psychology Society (APS) issued a warning to the AFL against working with organisations like Collective Mind, and shortly after Mr Bond relied on this now debunked story to express his concerns directly to the AFL and seek assurance that only psychologists would be permitted to work with athletes in the AFL.

“We completely respect the important role that psychology plays in dealing with pathology and mental health, however it’s clear that the psychology profession does not exclusively own mental performance. If it did, then the work of tens of thousands of valued leadership and sporting coaches around the world would be out of a job including mindset coaches who work with some of the world’s most successful sports people and World Number One athletes in this country.”

“We do appreciate Mr Bond and the APS’s concern for duty of care in mental performance work, which is why we often refer people on to psychologists and psychotherapists and take great care with the bounds of our performance work.”

“Mindset coaching is about performance not pathology and what we each do is complementary to an athlete’s performance and wellbeing. Our approach works time and time again to improve people’s lives, and that’s what matters.” said Mr Woulfe and Mr Leddie.

The Collective Mind directors also took issue with Tammy Franks, the Parliamentary Leader of The Greens in South Australia, who they say in July 2020 used her parliamentary privilege to make a range of incorrect and unfounded accusations about their organisation.

“Her continual calls for a SafeWork SA investigation resulted in an investigation that took more than a year to complete and ultimately found there were no safety issues. We are grateful that SafeWork SA has finally brought an end to this story, and we would appreciate her now publicly withdrawing those comments and set the record straight in Parliament.”

“We feel disappointed and let down by all these professional and public figures who never once picked up the phone and had a conversation with us to fact check the reality of what went on.”

“We were truly asked to live what we teach through this, and we reached for our mindset tools and mental training time and again throughout these past four years. Being put through this stressful mental and emotional challenge, and coming out the other end stronger, is a genuine testament to this work.”

“We have always understood and normally respected the role that media plays in covering and reporting on Australia’s much-loved sports,” said Mr Woulfe and Mr Leddie.

“However, this whole experience has been a sad indictment on sections of the Australian media who in our opinion, blatantly profiteered from manufacturing outrage. Some reporting appears to be a concerted effort to inflame, sensationalise, and demonise the people and organisations involved.”

“We are really proud of ourselves for standing up to people in high positions of power, and large organisations with very deep pockets. We would like to thank all our very loyal clients, family and friends in Australia and overseas who have stood steadfast with us through this incredibly challenging time.”